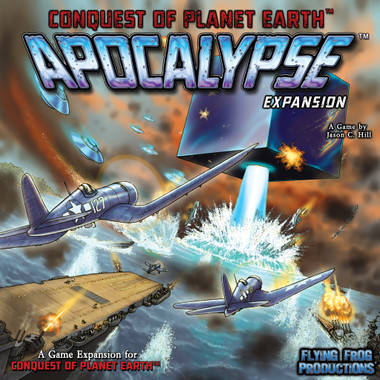 The Apocalypse Expansion for Conquest of Planet Earth™ sees the battle for Earth continue, escalating in scale as more Alien species are dispatched to the planet to take on the growing resistance of the stubborn Human defenders. Including several new Alien races to play (such as the fearsome Selenian Sirens, or the Martian Confederacy with their pack tactics), a new deck of Coastal Resistance for the Humans (filled with battleships, submarines, and navy Jet Fighters), and the awesome power of the dreaded Apocalypse Cube™, emissary of Armageddon. Apocalypse™also adds new cards to all of the original decks and includes more saucers and boards to expand the player count up to 5-6 players.