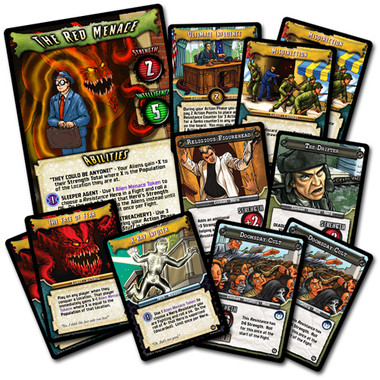 The Red Menace are masters of disguise and manipulation! Tentacled monsters that hide in the shadows and mislead with illusions and hallucinations, the Red Menace can be anywhere…or anyone. With panic and paranoia amongst the already frightened humans, they now swell the ranks of fanatical doomsday cults in an attempt to flush out this new hidden threat! Because everyone knows, mobs with pitchforks and torches always get the job done.

The new cards in The Red Menace Supplement are designed to be shuffled right into the existing COPE card decks and will give your Aliens powerful new Events and Space Stuff. But beware, the fanatical humans have rallied around their religious figureheads and are forming doomsday cults to strike back at the invaders! There has also been spotted a mysterious Drifter moving amongst them, who is clearly more than meets the eye. He seems, somehow…familiar.