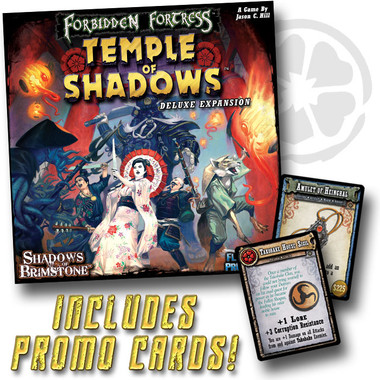 The Temple of Shadows was once the home of an ancient and powerful order of Yamabushi monks, dedicated to battling supernatural creatures throughout the land. It was foretold that one day the Great Dragon King, Sho-Riu would return to destroy the Earth, and only they could stop him. When the meteor came from the heavens and devastated the mountain, the Dragon King came with it. For generations the monks had been training for this moment, and as Sho-Riu descended on the temple, they gathered their strength and prepared to fulfill their destiny.

But their victory was not to be. Raining down death and destruction, the Dragon King broke through the monks’ defenses and utterly destroyed the order, devouring their souls and bringing Darkness and shadow into the sacred temple. Those few that survived were scattered and leaderless, but they would not sit idle. Traveling the roads and countryside, the last of the monks dedicated their lives to finding new Heroes that could one day fulfill the prophecy and reclaim… the Temple of Shadows!

The Temple of Shadows Deluxe Expansion adds new material specifically intended for use with the Forbidden Fortress Core Set, themed for Feudal Japan and the Belly of the Beast.

New Map Tiles
There are 4 new Map Tiles featuring temple-themed areas of the Forbidden Fortress. On the reverse side are new areas for the Belly of the Beast OtherWorld.

New Cards
Also included are a host of new cards for the Forbidden Fortress and Belly of the Beast Worlds, as well as new cards for Gear, Darkness, Growing Dread, Personal Items, Elemental Magik, and a new Adventure Card for setting your Missions in a Fallen Temple!

New Missions
There are 6 new Missions in the Temple of Shadows Expansion, each themed around different aspects of the new
Map Tiles, Cards, and Enemies.

New Enemies
This Deluxe Expansion includes a set of dangerous new Enemies to encounter, including: 12 small Chochinobake - Possessed paper lanterns with writhing tongues and ready to
explode. 3 large Skin Crawlers - Terrifying creatures that burrow through the flesh inside the Belly of the Beast and threaten to eat Heroes whole! 6 Takobake Spearmen - Mutant soldiers of the Takobake Clan armed with long spears. And 1 Extra Large Fallen Shogun - The Legendary leader of the Takobake Clan who has mutated to enormous size!

New Heroes
There are 4 new Hero Classes in the Temple of Shadows Expansion - Soldier, Geisha, Kitsune, and Enforcer. Each of these new Heroes has a unique set of abilities, starting Gear, and Upgrades.