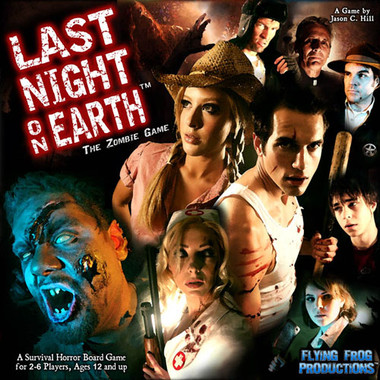 What's the deal with this discounted "Dinged and Dented" copy of the game?

Sometimes, during shipping of our products, boxes of games can become damaged in transit.  They are returned to us by our distribution partners and cannot be sold in retail stores due to damage, even though it is usually minor cosmetic damage.  Most often, components are unaffected, just the game box has been dented, punctured, torn, or dinged.  These "Dinged and Dented" copies of Products are available here for a deep discount but are sold AS-IS, no returns or refunds.

Last Night on Earth, The Zombie Game is a fast-paced game of brain-eating Zombies, small town Heroes, and horror movie action. Players take on the role of either the Heroes, working together to make it through the night; or the Zombies, unending waves of undead spreading over the town like a plague. Featuring a modular board, eight Heroes to choose from, and several different Scenarios to play that drastically change the game. Last Night on Earth is designed to create a cinematic feel as the story and game unfolds.

So put down that popcorn, grab your shotgun, and hide your brain; the Zombies are coming and this could be your Last Night on Earth.