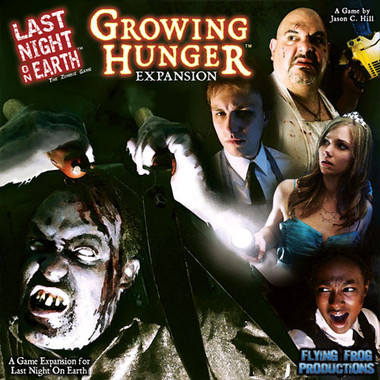 What's the deal with this discounted "Dinged and Dented" copy of the game?

Sometimes, during shipping of our products, boxes of games can become damaged in transit.  They are returned to us by our distribution partners and cannot be sold in retail stores due to damage, even though it is usually minor cosmetic damage.  Most often, components are unaffected, just the game box has been dented, punctured, torn, or dinged.  These "Dinged and Dented" copies of Product are available here for a deep discount but are sold AS-IS, no returns or refunds.

As the living nightmare of the Zombie attack continues, the bitter struggle for survival grows increasingly deadly. Desperate for flesh, Zombies swarm over the town of Woodinvale, leaving a gruesome wake of death and destruction in their path. With nowhere to hide and a renewed determination, the remaining Heroes add more survivors to their ranks and find new weapons to fight back the growing hunger of the dead.

The Growing Hunger Expansion introduces new game mechanics and three exciting new Scenarios to challenge players as well as a two player mini-game. Take control of four new Heroes, each with a highly-detailed plastic miniature as well as seven new Red Zombies for use as Plague Carriers, Grave Dead, or to increase the Zombie Horde. New modular game board sections expand the town and feature unique buildings such as the Supermarket, Library, and Antique Shop. New game cards give Zombies a chance to steal weapons from the Heroes and add powerful Double-Handed weapons to the Heroes arsenal, such as Garden Shears and the Fence Post. Also included are two new full color, die-cut counter sheets adding Free Search Markers for the Heroes as well as many more fun ideas to the Last Night on Earth toolbox for limitless use with official web content or creating your own new Scenarios.