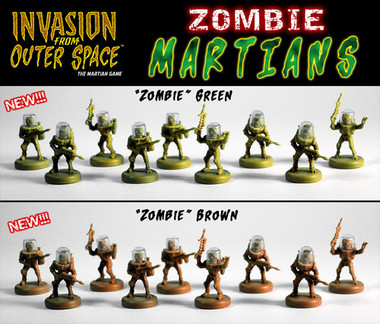 LNOE/IFOS: Zombie Martians!
This is a very special set of Martian miniatures from Flying Frog's 'Invasion From Outer Space' game but with a twist! We made these Martian figures in Zombie Colors to match Last Night on Earth's Brown and Green Zombies. This can be very useful in LNOE/IFOS Crossover games because when a Zombie kills a Martian, it can rise again as a Zombie Martian!!! Set of NINE Martians in Brown or Green with separate Helmets (allowing you to paint them before gluing on the helmets).