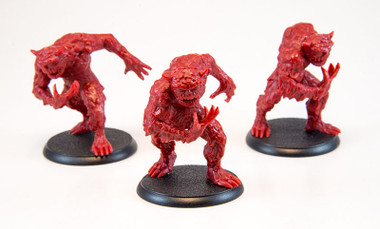 Standing nearly ten feet tall, the Night Terror is a hideous demon with sunken glowing eyes, a grotesquely wide mouth, lined with razor sharp teeth, and covered in dark blue fur and rocky skin. Often found roaming the icy halls of the long dead cities of the Targa Plateau, the Night Terror’s dark and thick fur allows it to move unseen in the shadows. Its clawed hands can rend a man limb-from-limb in a single sweep of its mighty arms, yet it often prefers to grab hold of unwary explorers and steal away with them into the dark night!

Where it takes the unlucky victims is unknown, but it is rare that any have escaped the clutches and lived to tell the tale. Many times the only indication of the presence of a Night Terror is the faint menace of its gurgling and hissing in the dark, the likes of which will causes a chill to the bone on a primitive level of sheer terror.

This Miniature Set contains 3 Night Terror Large models in Red Plastic, as well as the 40mm Plastic Bases for them. These are multi-piece figures that require assembly.