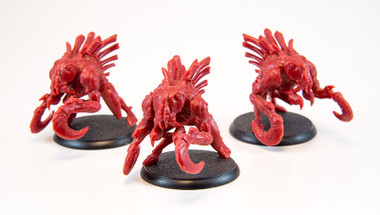 Large beasts with thick chitinous shells, Slashers are insectoid creatures with brutally efficient slashing claws. Burrowing through rock and stone with their powerful hooked arms, they greedily search for Dark Stone to feed on. Two pairs of heavy mandibles surround their mouth, used mainly to hold their prey and pull it closer so their powerful jaws can crush and devour. A pair of large, black and soulless bug eyes belie their cold dispassionate hunger, and the hateful chittering sound they make would chill all but the most stalwart to the bone.

Just one of these creatures is difficult to overcome, but they most often travel in small packs of two or three, scouting ahead of a larger Slasher hive and searching for their next source of food, be it Dark Stone or humans.

This Miniature Set contains 3 Slasher Large models in Red Plastic, as well as the 40mm Plastic Bases for them. These are multi-piece figures that require assembly.