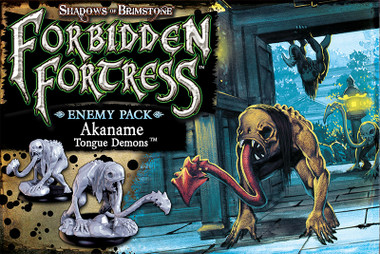 There are many ghouls and demons that dwell in the ransacked chambers and halls of a fallen fortress, but perhaps none so nightmarish as the Akaname! Known as the ‘Filth Lickers’, these wiry creatures have long, lashing tongues, stringy wet hair, and jagged, broken claws, scaling the walls and ceilings of the abandoned castles and musty mines that have fallen into shadow. Attracted by the sweet taste of taint and corruption, the Akaname tongue demons shiver with anticipation when they sense fresh meat nearby, longing for a taste of the foul deeds and dark dreams of mortal minds!

This Enemy Pack contains everything you need to add the leaping and lashing Akaname Tongue Demons to your games of Shadows of Brimstone! There are 6 Akaname models included, as well as the large Enemy Record Sheet and all of the Threat Cards needed to add them to your games.