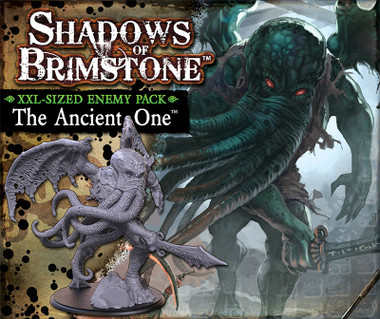 The Ancient One XXL Enemy Pack

One of a massive and powerful race of alien beings, The Ancient One is from far beyond the stars! As old as time itself, he slumbers in the Void, dreaming worlds into existence and crushing entire realities with his nightmares. On rare occasion, The Ancient One will stir in his timeless sleep, manifesting himself in a physical form that can hold shape in our world. Tearing a hole in time and space, he emerges from the Void, bringing Ancient Doom and despair to all those who lay eyes upon his hideous and twisting visage.

This XXL Deluxe Enemy Pack contains everything you need to have Epic battles with the unspeakably terrifying Ancient One! Included are 1 massive, multi-part Ancient One model, the extra large Enemy Record Sheet for him, all of the Threat Cards and Ancient Doom cards needed to add it to your games, as well as a new Mission focusing on facing off against this ancient and deadly new Enemy!