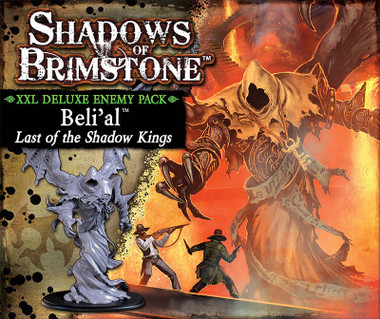 Banished eons ago, the Last of the Shadow Kings, Beli’al, was imprisoned for his treachery in the fiery hellscape of the Caverns of Cynder! Above all else, he seeks to break his chains and escape his eternal prison. Sitting atop his magma throne, Beli’al feeds on the souls of the damned to gain strength...strength that will one day allow him to rise once more and reclaim his apocalyptic reign! The magical bindings placed on Beli’al by the Ancients prevent him from taking physical form, but over the ages, he has regained enough power to break off shards of his evil and fashion them into Shades of his former glory or even powerful Avatars of Darkness to do his bidding! He sends these shards of evil through portals that have torn open into other worlds, searching for a way to break the seals that bind him. Day by day, his power grows... It is close now... Soooo Cloooose... soon the world will tremble once more before his wrath! For a new age is coming! An age of shadow and fear! The Scourge of Worlds, Lord of Cynder, Last of the Shadow Kings, Beli’al will have his revenge!

This Deluxe Enemy Pack contains everything you need to add epic confrontations with the Legendary Lord of Cynder, Beli’al, to your games of Shadows of Brimstone! Included are 1 massive, multi-part Beli’al model, the extra large Enemy Record Sheet for him, a host of new cards themed around his ancient darkness - including a deck of Shadow Magik and all of the Threat Cards needed to add him to your games, as well as 2 new Missions for pitting your Heroes against this ultimate evil!

This XXL Enemy Pack expansion requires at least one Core Set of Shadows of Brimstone to play.  You do not need a copy of the Caverns of Cynder OtherWorld Expansion to use this enemy pack.