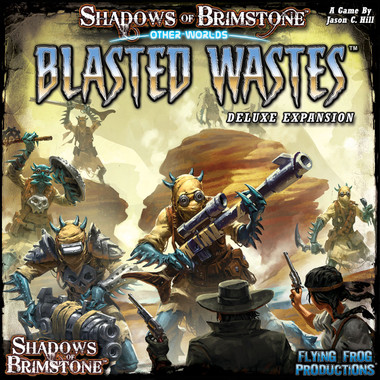 An inhospitable and corrosive alien desert, the Blasted Wastes is a distant planet used as a prison world by nearby alien civilizations, marooning their worst criminals on the surface with no hope of escape! Though most sent to the wastes are consumed by the deadly creatures that live under the sand, or fall victim to the burning suns, sulfur acid pools, or toxic Dark Stone dust storms, those that survive eke out a living by forming vicious warbands to scavenge the desert dunes, searching for resources and the countless alien treasures buried beneath the burning sands.

The Blasted Wastes Deluxe OtherWorld Expansion offers a lot of new material, not only for exploring and fighting your way across the new OtherWorld of the Blasted Wastes, but also for all new adventures on the frontier, with the Canyons!  Two New Worlds.  With this set, gateways have opened up leading to the corrosive alien desert world of the Blasted Wastes - full of perilous, environmental hazards and vicious warbands of alien Scavengers that rove the desert dunes, stealing supplies and resources from any that cross their path. Also included is a brand new Old West themed world... the Canyons! It is fully realized as an additional World with a full set of cards, Map Tiles, and even some Missions to bring your Heroes into the dusty valleys and rocky gulches of the Old West!

This Deluxe OtherWorld Expansion includes a host of dangerous new Enemies to encounter, including: 6 Wasteland Scavengers -
Ruthless alien nomads that travel the Blasted Wastes in search of supplies and resources to steal. 3 large Sand Crabs - brutal creatures with thick, armored shells that live beneath the desert sands. 6 Ghost Warriors - Indian braves that have been possessed by the Darkness, flickering in and out of reality as they descend from the canyon cliffs to attack travelers. 2 Scavenger Heavies - Wasteland Scavengers that wield powerful, rapid fire Scrap Cannons. And 1 Wasteland Warlord - A vicious and terrifying leader of the Scavengers.

Like all Worlds, the Canyons has a set of unique Encounters, Artifacts, and Map Cards, as well as a couple of Global Rules that make adventuring there more distinct. The Global Rules are listed on the World Card included in this expansion.  Though the Canyons is a different ‘World’ from the Mines, it is still on Earth, rather than being an alien environment. Because of this, the Canyons are not considered to be an ‘OtherWorld’ per se (for cards, abilities, etc that have special effects in an ‘OtherWorld’). Also, as the Canyons is a normal World (like the Mines), it uses the normal Low, Med, and High Threat Decks for Enemies found there, rather than a specific OtherWorld Threat Deck (though you may custom build your Threat Decks just for the Canyons, if you like).

Like all OtherWorlds, the Blasted Wastes has a set of unique Encounters, Artifacts, Map Cards, and OtherWorld Threat cards, as well as a couple of Global Rules that make adventuring there more distinct. The Global Rules are listed on the World Card included in this expansion.  While exploring the Blasted Wastes, Heroes will encounter all manner of environmental hazards, from Dark Stone dust storms, to toxic gases being released from the sulfur acid pools that dot the landscape, to sinking sand that threatens to pull the Heroes down below the surface! The twin suns of the Blasted Wastes can also play a big part in the environment, as the suns shift from Day to Dusk, and into Night. The desert wasteland is a dangerous place, and not to be traveled lightly.