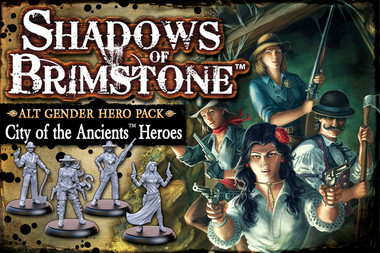 This Alt Gender Hero Pack contains everything you need to add these four additional Heroes to your games of Shadows of Brimstone. Included are the Miniatures for the Alternate Gender versions of the Heroes originally found in the City of the Ancients Core Set - US Marshal, Piano Player, Bandida, and Gunslinger, as well as all of the cards, Hero Character Sheets, Upgrade Charts, and counters needed to play as these Heroes.