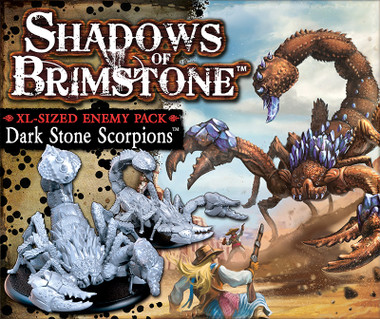 The mines and deserts around Brimstone are filled with nightmare monsters and creatures beyond imagination! Though many of these monstrosities come from OtherWorlds or the Void between worlds, the unbridled energy of the Dark Stone has a corrupting influence on animals and creatures native to the deserts of the SouthWest too. One such mutation are the massive Dark Stone Scorpions that roam the desert wastes, nesting in the mines and hills near the stronget pockets of Dark Stone. Grown to enormous size, these hard-shelled terrors have razor-edged claws that can snap a man in two with a single powerful pinch!