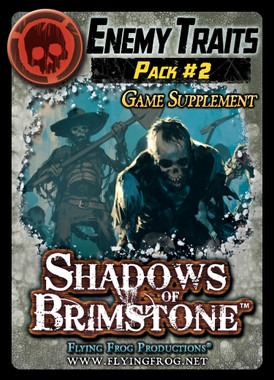 Trait cards are used to give a particular enemy type more diversity (and often a bit more danger).  This is the second in a series of Trait Packs that re-visit established enemies from Shadows of Brimstone, adding unique new traits to them, and making them feel different each time you encounter them!  This Card Supplement contains a set of trait cards for three different enemies from the original Swamps of Death Core Set of Shadows of Brimstone: Hell Bats, Slashers, and Hungry Dead enemies.  Also included are rules for your Heroes becoming "Zombie Heroes" after being bitten by Hungry Dead!

This card supplement adds a collection of Enemy Traits for Hell Bats, Slashers, and Hungry Dead Enemies for Shadows of Brimstone.