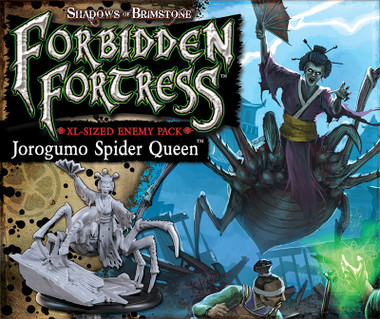 Ancient and powerful creatures of legend, the Jorogumo Spider Queens have spun their webs of deceit and manipulation from the shadows since the dawn of civilization. With the body of a massive and terrifying spider, and the torso of a woman with tattered clothes and sharp claws, the Jorogumo wield deadly Spider Magik that rivals even the most powerful Elemental Magiks. Covering their lairs in thick, sticky webs, the Spider Queens spread their influence by infesting fortresses and villages, turning the residents into loyal and venomous spider thralls, to feed their dark ambitions.

This XL Enemy Pack contains everything you need to have Epic battles with a terrifying Jorogumo Spider Queen! Included is 1 XL size Jorogumo Spider Queen model, the large Enemy Record Sheet for her, a host of new cards including an Adventure card for theming Missions to be Spider Queen Missions, new Encounters, a deck of Spider Magik, and the Threat Cards needed to add her to your games, a small sheet of die-cut counters, and a new Mission focusing on hunting a Spider Queen to her shadowy webbed lair!