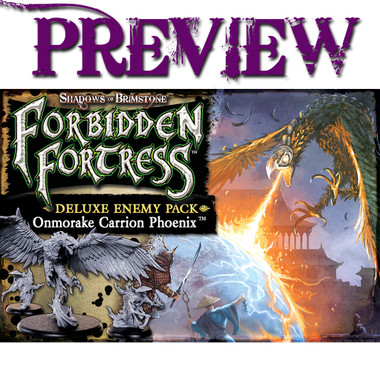 Born of fire and death, the fabled Onmorake Carrion Phoenix is a massive winged beast. Breathing gouts of supernatural flame, it soars through the sky, scorching the earth and leaving a charred trail
of ash and decay in its wake. Its bony beak and razor sharp talons flay the flesh from its prey, while the burning fire it spews spreads its foul disease. It is not uncommon for the burnt victims of the Onmorake to rise back up as plague-ridden Scourge Dead; fearsome skeletal warriors still ablaze with the unnatural flames that consumed them.  It is said that the Onmorake were once mortal creatures, cursed by the gods to be forever reborn in death. Now they stalk the shadows, emerging to add more bones of the living to their gore-filled burial mounds; the vile plagues of the carrion creature, carried on the winds to wither all life they come in contact with.

This Deluxe Enemy Pack contains everything you need to add the terrifying undead Onmorake Carrion Phoenix and its horde of Scourge Dead zombies to your games of Shadows of Brimstone! Included are 1 Extra Large Onmorake model and 6 Scourge Dead models, the 2 large Enemy Record Sheets for them, a host of new cards themed around these undead terrors that are riddled with vile plagues to spread amongst the living - including all of the Threat Cards needed to add them to your games, and 2 new Missions focusing on these deadly new Enemies!