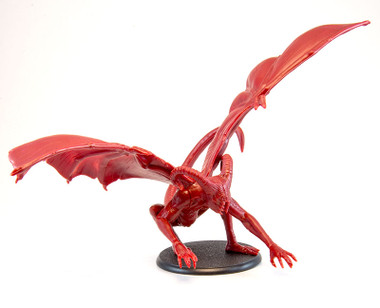 The massive, demonic Harbinger is one of the most fearsome creatures yet encountered by those that delve down into the cursed mines near Brimstone. With sprawling bat-like wings and long, sinewy limbs, nothing can escape the Harbinger’s foul reach!

Its bony, horned skull-head holds no eyes, but rather two rows of pitted nostrils to sniff out its prey in the dark, and consume the flesh of unwary explorers with its vicious maw of razor sharp teeth.

Often accompanied by a swarm of slithering HellBats, the Harbinger brings doom to all who gaze upon him and despair to those that hear his name!

This Miniature Set contains 1 Harbinger Extra Large model in Red Plastic, as well as the 60mm Plastic Base for it. This is a multi-piece figure that requires assembly.