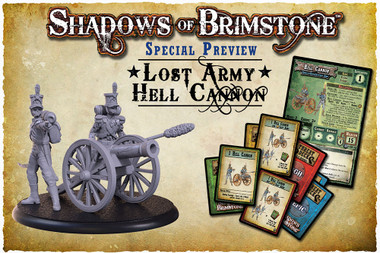 Once part of Santa Ana’s Mexican Legions, the Lost Army was dispatched northward to investigate a mythical ‘black rock’ with magical properties found up in the hills. Presumed dead for over 50 years, they have now returned with a burning hatred for the living and their full compliment of siege weapons, now twisted into thunderous and deadly Hell Cannons!

This Enemy Pack contains everything you need to add the Lost Army Hell Cannon to your games of Shadows of Brimstone! There is 1 plastic XL Hell Cannon and Crew model included, as well as the large Enemy Record Sheet and all of the Threat Cards needed to add it to your games.

This preview version has the same plastic figures and printed material as the final retail version will have, but does not include retail packaging.  The retail version is not even in the production schedule yet, so this is an exclusive preview opportunity!