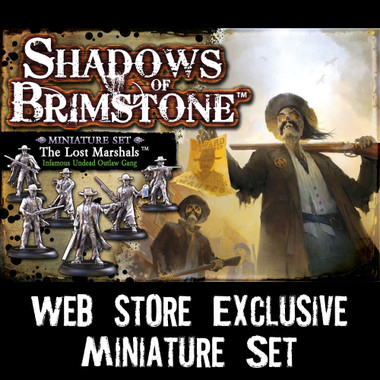 Six undead lawmen with tattered black dusters, rusty shotguns, and tarnished tin badges of their former trade, walk through a small old west town, striking terror into the hearts of the townsfolk! The lead Marshal holds up a tattered wanted poster of a man that they are seeking. This is a group of Infamous Undead Outlaws introduced in the Undead Outlaws and Undead Gunslinger Deluxe Enemy Pack. They have skull faces with large handlebar mustaches. This pack of unlawful turncoats betrayed their oath and their country to get rich on the frontier. It caught up to them in life, but in death...they dispense a new form of law!

Flying Frog has released unique models to represent different characters or specialty allies in the past, but this set of Lost Marshals is on a whole new level. “We’ve always wanted to do unique miniatures to represent specific groups of enemies like ‘Infamous Undead Outlaws’ but it is a big undertaking to do an entire group of enemies.” says FFP Art Director, Jack Scott Hill. “We concepted three different models, but once we started sculpting them, they were turning out so cool, we ended up doing unique sculpts for ALL SIX models!”

This metal Miniature Set contains figures to represent the Lost Marshals from the Undead Outlaws Deluxe Enemy Pack and you must have a copy of this expansion to use these miniatures in the game.

Figures supplied unassembled and unpainted.  Does not include any printed material, cards, or rules.