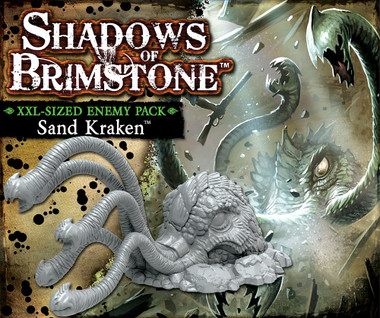 Tunneling through rock and sand and time, these ancient and massive creatures lay dormant beneath the surface of the world for millenia. Earthquakes rock the ground and mountains tremble as the most massive of these beasts stir in their timeless slumber, waiting to awaken, rumbling to the surface to feed their eternal hunger.  When a Sand Kraken re-emerges from the deep, breaking through the surface like the tip of a horrifying iceberg, the vast majority of its beastly body remains writhing and clawing through the ocean of rock below.

The Sand Kraken is a massive and terrifying creature to behold! The vast bulk of its form remains underground as it tunnels through the rock and sand, bursting its head out of the ground to lash out with its many snapping and spitting tentacle mouths.  This XXL Enemy Pack contains everything you need to have Epic battles with the unspeakably horrifying Sand Kraken and its writhing tentacle mouths!  Included is 1 massive Sand Kraken model, the extra large Enemy Record Sheet for it, all of the Threat Cards needed to add it to your games, and a new Mission focusing on hunting down this deadly new Enemy!