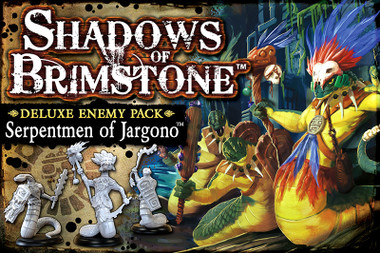 Fiercely tribal, the Serpentmen of Jargono have built a civilization on brutal warfare and massive stone temples to their Serpent Gods!  They stalk the swamps, hunting their prey while protecting their territory from outsiders and other tribes that would conquer their lands.  There are countless tribes, each with a different culture and style all their own.  These tribes are led by great shamans that wield voodoo magik and can call forth the wrath of the Serpent Gods themselves!

This Deluxe Enemy Pack contains everything you need to add the savage Serpentmen Warriors and their powerful Shaman to your games of Shadows of Brimstone, including two new Missions focusing on these deadly new Enemies!