Shadows of Brimstone: The Guardian of Targa XL Enemy Pack 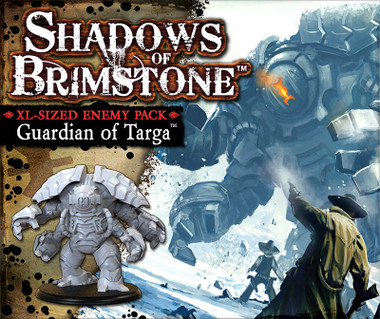 The frozen over alien city of the Targa Plateau is home to many ancient terrors that have laid dormant for eons.  Massive robotic Guardians are awakened when the city is in danger.  These mechanical monstrosities pull free from their alcoves to hunt down and eliminate whatever threats are detected.  Easily standing three or four times the height of a man, these Guardians are cold and calculating in the execution of their duties to defend the city against all intruders.  Many explorers have found their way to the Targa Plateau... far fewer have ever returned!

This Enemy Pack contains everything you need to add the ancient and massive robotic Guardian of Targa to your games of Shadows of Brimstone, including the cards, Enemy Record Sheet, and Extra Large, multi-part model for the Guardian of Targa!