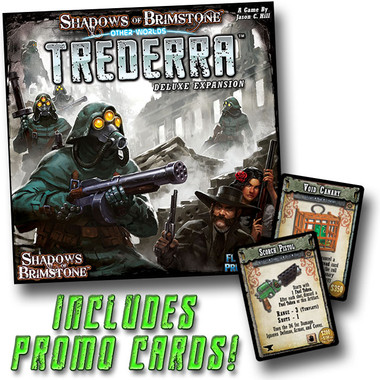 On the war-torn, industrial-age battlefields of Trederra, legions of alien soldiers patrol the ruins of their once great cities, searching for anyone foolhardy enough to intrude into their territory. Waging war on each other for generations, the battle-scarred Nations of Trederra use Dark Stone to fuel their engines of death, polluting their planet with radiation and drifting clouds of toxic gas. But there are also treasures to be found amidst the devastation, weapons and technology advanced beyond reckoning by brutal centuries of warfare.

The Trederra Deluxe Expansion introduces a brand new OtherWorld for the Heroes to explore!  This includes a full set of 18 new Map Tiles depicting the war-torn planet of Trederra, with dangerous new Radioactive Spaces and Cover Terrain! These Map Tiles also have an all new set of unique Mine rooms on the reverse, bringing more variety and new Encounters to discover throughout the Mines.  All of the cards needed for this alien world are included, such as Trederran Encounters, Artifacts, Map Cards, OtherWorld Threats, and more, as well as a host of new cards for adventuring in the Mines!  6 New Missions will challenge your Heroes as well.

This Deluxe OtherWorld Expansion includes a host of dangerous new Enemies to encounter, including: 6 Trederran Legionnaires - Alien soldiers committed to the cause of ‘winning the war’ for their Nation and armed with deadly Dark Stone weaponry to get the job done. 3 large Z-4 Grenadiers - Heavily armored demolition soldiers immune to all but the strongest attacks and armed with terrifying thermal charges. 6 Trederran Mutants - Soldiers who have succumbed to the corrupting radiation of the Dark Stone and are now little more than viciously mindless savages. And 3 Trederran Lieutenants - Ruthless officers that command their legions with an iron fist.  Also included are 6 pieces of plastic Cover Terrain (3x Barrels and 3x Tank Traps). These are for use with the Cover Terrain rules and are placed on the board to give a more 3D feel to the Environment.

Like all OtherWorlds, Trederra has a set of unique Encounters, Artifacts, Map Cards, and OtherWorld Threat cards, as well as a couple of Global Rules that make adventuring there more distinct. The Global Rules are listed on the World Card included in this expansion.  While exploring Trederra, Heroes will find themselves navigating an extremely hostile environment full of Land Mines, poisonous Toxic Clouds, Acid Rain, and relentless patrols of Enemies, always on the hunt for intruders. There are many treasures to be found though, amongst the ruins and devastation, especially in the form of powerful alien weapons and protective clothing and gear.