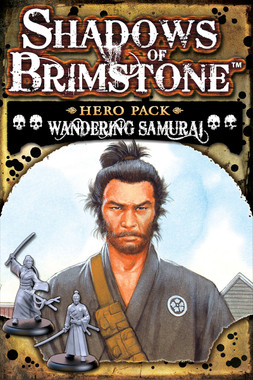 The Wandering Samurai is a new Hero Class that can be added to your games of Shadows of Brimstone. He is a strong close combat fighter and expert swordsman, making him nearly unmatched in both attack and Defense. Building Fury as he strikes down Enemies, the Wandering Samurai then unleashes that Fury in the form of powerful Battle Tactics.

This Hero Pack contains everything you need to play as a Wandering Samurai in your games of Shadows of Brimstone! Includes 2 Wandering Samurai models (both male and female) in high-detail PLASTIC. Also included are the large Hero Character Sheet, Upgrade Chart, an assortment of counters, and all of the cards needed to take on the role of a Wandering Samurai Hero, one of the last of a dying breed of honorable warriors, traveling through the western frontier.