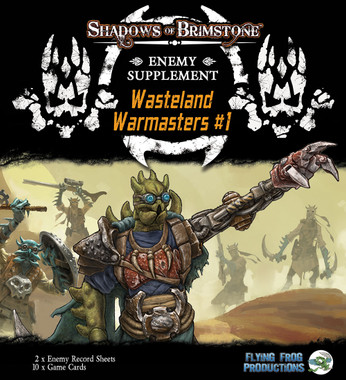 The Wasteland Scavengers are a motley crew of criminals, cutthroats, and raiders!  Brutal warriors lead by powerful Warlords that don’t just want to survive in the barren and lawless wastes, but rather to thrive there! Some Warlords gain a fearsome reputation and high level of infamy from their savage exploits. These most feared Warlords are known as Wasteland Warmasters!

This set adds new large Enemy Record Sheets for 2 of the dangerousWasteland Warmasters – Tar'Rio Gant and Celarrius Drakoth, making them full Enemy mini-bosses. It also includes new Wasteland-themed Artifact cards, as well as a set of new Threat cards that combine various Blasted Wastes themed Enemies together, and even Epic Threats to face off against a more dangerous version of each of these Wasteland Warmasters with their Scavenger crew.